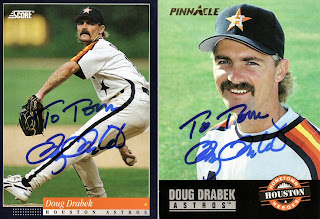 I sent off two cards to Doug Drabek on April 1st and got them back today. I had sent them off to a home address only to have the come back 'Return to Sender' nearly two months ago until trying the Pirates alumni association.

I've learned to actually appreciate RTS letters. I started collecting commemorative stamps again (back in '99), so if a letter is returned I at least get my stamp back. I should have used them long ago rather than the generic looking definitives.

I really wanted this '93 Pinnacle signed; it's just one of those cards that begs to inscribed.

Confession time; the Drabek card featured in my first post is not mine. I snagged that off the 'net when I needed something depicting an Astro. I had not originally planned to show off my signed cards...I just needed a way to advertise that I have about 12,000 Astros cards that I might want to trade.

Anyway, I already had a Drabek card in my collection. I used to follow him as a Pirate so I sent off a '91 Donruss card to him back around '92. These cards look way better.
Posted by Tom at 9:41 PM No comments: 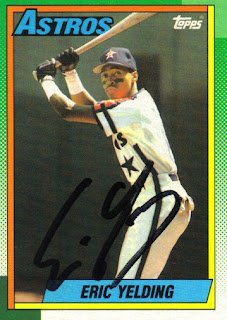 Back when I was a sophomore at Sam Houston State University my suite-mate (Paul) asked if I wanted to go meet some Astros. I was a good ol' country boy and hardly ever had the chance to drive down to the city. Houston was nearly 200 miles south of me so it was rare that I had a chance to visit, much less attend games at the 'Dome. When he mentioned something called 'Astrofest' I was more than ready. I grabbed what few Astros cards I had at the time and me, Paul, and our friend Nena drove down to H-town from Huntsville on January 19, 1991.

I met Eric Yelding, Mark Portugal, Larry Dierker, and Carl Nichols that day. I took a picture of Eric Anthony but never got around to meeting him. All that for a $5.00 admission ticket. I have no idea what it costs today to go to the annual Fanfest, but I'm sure it's much more. 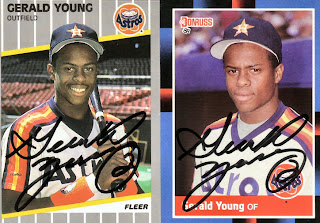 I sent off two cards to Gerald Young on April 1, 2009 and they came back on April 23rd.   I went to put them in my autographed card album and realized I already had two of his cards signed; in fact, I already had the same '89 Fleer card signed several years ago.
I guess it pays to keep better records...or in my case at least check your records before sending out cards.
Posted by Tom at 8:17 PM No comments: 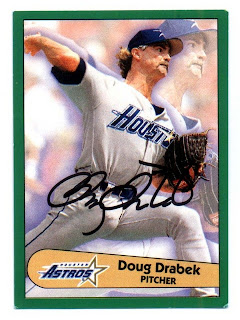 I collect Astros cards (and Colt .45s, too). I put together team sets for each year and always end up with hundreds of extras. If you want to swap send me a want-list (e-mail: jpo_tx113@yahoo.com) and I will see what I have. I'm also interested in buying what I don't have. I can send a want-list to you and will try from time to time to list them here somewhere on the blog.
I mostly have common cards to send, so do not send me a list of inserts that you need. However, I do have a large supply of cards from 1975 to the present that can be used to fill some gaps in your collection.