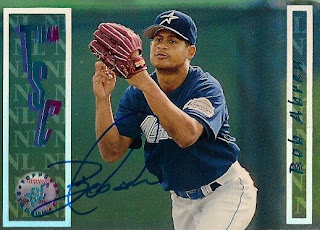 Bobby Abreu (aka "El Comedulce" (the candy-eater) and also "La Luche"), started his Major League career with the Houston Astros. He played only 74 games over two seasons with Houston before becoming the 6th pick for the Devil Rays in the 1997 expansion draft.

Abreu is currently with the Angels. 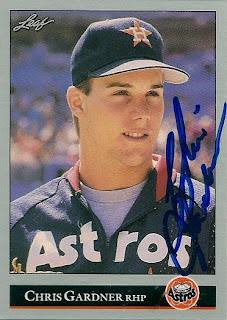 Chris Gardner was drafted by the Houston Astros in the 6th round of the 1988 amateur draft. He played five games in the major leagues in 1991. From 1988 to 1995 he played in a total of 116 games in the minors for various Astros farm teams. 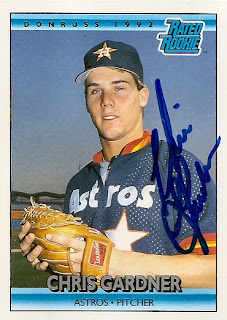 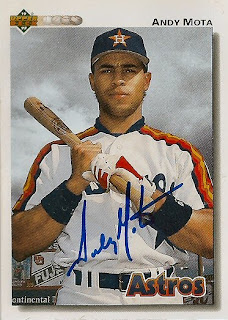 He played 27 games in the majors in 1991 (with Houston). Most of his career was spent in the minors (1987-1994), with the majority of that spent with the Houston organization.

Andy is the son of Manny Mota.
Posted by Tom at 9:44 AM No comments: 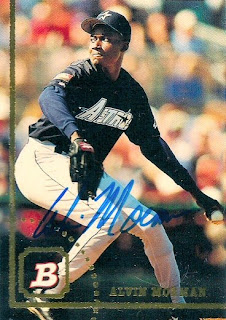 Morman was drafted by the Astros in the 39th round of the 1991 amateur draft. He spent six seasons with Houston and one season with them in the majors. He was traded to the Cleveland Indians for Jose Cabrera; eventually traded in 1998 by the Indians with Shawon Dunston and Jose Mesa to the San Francisco Giants for Jacob Cruz and Steve Reed. Signed as a Free Agent with the Kansas City Royals in 1998 and released a year later.

Following his baseball career, Morman received a master’s degree in school counseling from North Carolina Central University, and is currently a guidance counselor at a public school.
Posted by Tom at 10:43 AM No comments: 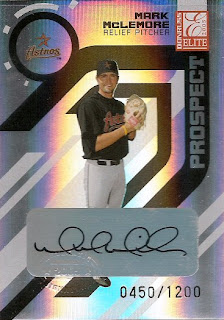 Mark McLemore was drafted in the 4th round of the 2002 Major League Baseball Draft out of Oregon State University. McLemore made his big league debut for the Astros on May 24, 2007, pitching one inning of relief against the Arizona Diamondbacks. He missed the entire 2008 season due to elbow surgery but made it back to the Round Rock Express last season. 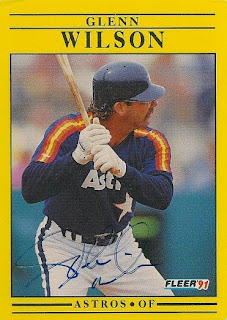 Wilson was known as Glennbo, a reference to Rambo, once appeared in a Phillies promo ad dressed as Rambo. I'll have to tell my little brother about this (we started calling him Glenbo back around 1973, way before Rambo existed).

In 1979 he was on the NAIA All-American team. He played college ball for the Sam Houston State Bearkats (1978-80). It appears he applied as the head baseball coach there in 2006. That would have been great; at least I'd know where to find him so I could get a card with a better looking sig (still need to upgrade this one for my SHSU alumni collection).

George Bjorkman was traded by the St. Louis Cardinals to the Houston Astros for Jeff Meadows (minors). On March 26, 1984 he was sent by the Astros to the Montreal Expos to complete an earlier deal made on February 24, 1984. 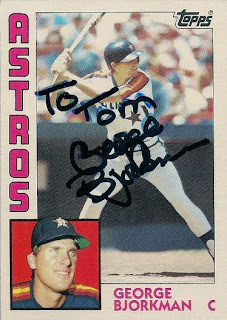 He had only one card issued (this one). You can see where he started to sign with a blue pen, which appeared to run out of ink, so he signed over what he had already written. 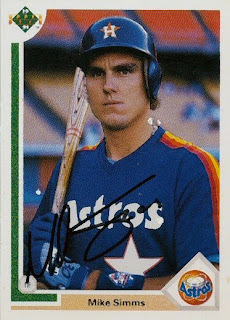 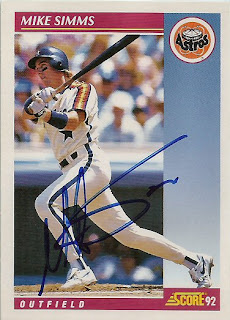 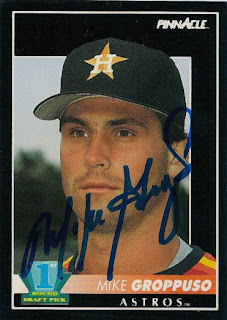 Drafted by the Houston Astros in the 1st round (44th) of the 1991 June Draft. Played minor league ball for Houston until 1999. Currently the baseball coach at Kingston High School in Kingston, New York.
Posted by Tom at 4:48 PM No comments: 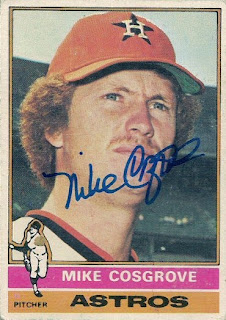 Drafted by the Houston Astros in the 2nd round of the 1970 amateur draft (Secondary Phase). Major league debut was on September 10, 1972. Final game was with Houston on September 25, 1976.

Originally drafted by the Reds in 1969 but did not sign. In 1989, Cosgrove played for the Orlando Juice of the Senior Professional Baseball Association. In 1990 he pitched 4 games in the Senior Professional Baseball Association for the Florida Tropics. It appears Cosgrove played three games this past summer with the Orange County Flyers of the Golden Baseball League. 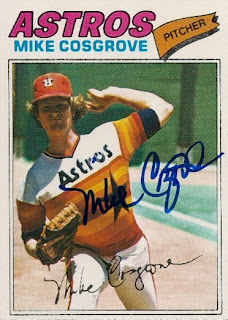