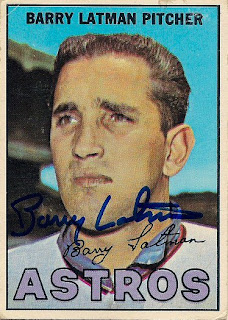 Barry Latman played in the major leagues for eleven years; the last two (1966-67) were in Houston. He made two appearances in the All-Star games with Cleveland during the early '60s.

I sent Barry this card (1967 Topps #28) in early June, only to have it returned (turns out he had moved). I found a new address and dropped it back in the mail on June 29th and got it back today.
Posted by Tom at 8:12 PM No comments: 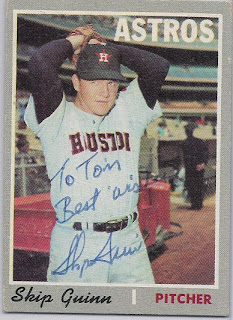 I finally got around to scanning my first Skip Guinn card. The card from the previous post was obtained from a large lot of cards won on eBay; this one was sent off to Skip several years ago for him to sign. Sent off on 11/1/99; received 1126/99

I like these old 1970 cards. This is probably my favorite set, followed closely by the 1963, '65, and '76 sets. This one shows Skip in a classic posed shot, thinking seriously about what pitch to throw. Gotta love it! This also is the second card from the early '70s that I've seen with a cop or security card standing close by in the background. I can't think of too many recent cards like this.
Posted by Tom at 10:42 PM No comments: 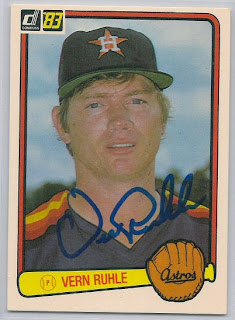 Vern Ruhle was drafted by the Detroit Tigers in 1972. He made his major league debut in 1974 and continued to play for the Tigers through 1977.

Following his career as a pitcher he was a pitching coach for the Astros, Phillies, Mets, and Reds. Unfortunately, Vern was diagnosed with cancer in 2006 and passed away the following year.
Posted by Tom at 9:15 AM No comments: 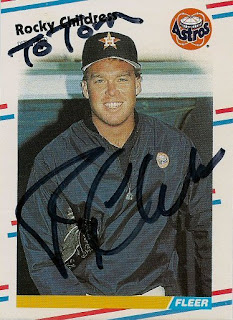 I sent Rocky Childress two cards on June 17th and received them back yesterday, July 15th. I had sent them to his address in Santa Rosa, CA and the postmark on the envelope that came back indicated that it had been mailed from Bend, OR.

Rocky began his career with the Phillies and played with them in 1985-86. He was signed back in '80 and spent several years in the minors before being called up. He was bought by the Astros in '86 and spent the last two years of his major league career with them (1987-88). Afterwards he again played for a few years in the minors before retiring in 1995. 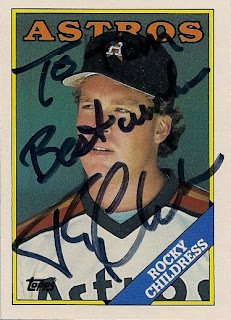 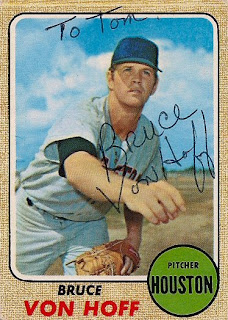 I sent Bruce Von Hoff card #529 from the 1968 Topps set on 6/10/09 and received it back today. Mr. Von Hoff also sent a nice letter, which he also signed. In fact, he even signed the piece of cardboard I used to prevent the envelope from being bent--so three signatures total! In his letter he stated that it would "be a pleasure. Thank you for asking, you've made me feel special".

I always appreciate it when someone includes a letter with the card I've sent, and more so when they let me know how much it means to them.

Bruce was drafted by the Houston Colt .45's from the San Francisco Giants in the 1964 first-year draft. He played in three games in 1965. In 1967 he played in a ten more games in the majors. He spent the rest of that season plus five more games in '68 with the Dallas-Fort Worth Spurs.
Posted by Tom at 7:59 PM 2 comments: 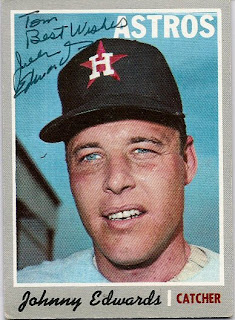 Edwards was traded on October 11, 1968 (with minor league player Tommy Smith) to the Houston Astros for Dave Giusti and Dave Adlesh. After playing his first season for the Houston Astros in 1969 he finished 36th in voting for the National League MVP. He would finish out his career in Houston in '74. 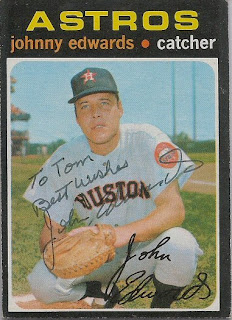 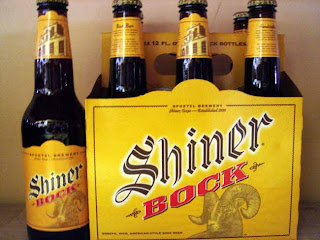 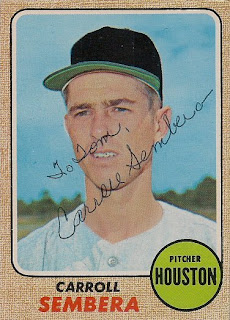 Carroll was born there on July 26, 1941. Sadly, he died there on June 15, 2005. He made his debut with the Astros in 1965 and played for them until 1967. He then went to play for the Expos, which lasted until April of '70 (five whole months before I entered this world). After that he spent over a decade as a scout for the Mariners.

He was known for his split-finger fast ball. You can see LaCoss here on his '84 Topps card where his arm appears to be melting; I guess he was really throwing some heat that day... 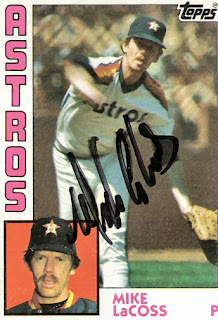 This was probably one of the first cards I sent off through the mail to have signed. 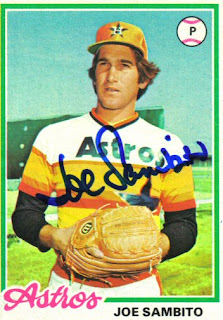 Joe Sambito began his career with the Astros in 1976. He played ball for them until 1984. My first time to see the Astros was in 1983, but unfortunately I did not get to see Joe play; he missed all of that season due to an injury, which eventually led to his retirement from baseball in 1987. At that time he was playing for the Red Sox.

Joe still has a career in baseball...more or less. These days he is an agent representing other baseball players.
Posted by Tom at 11:21 PM No comments: