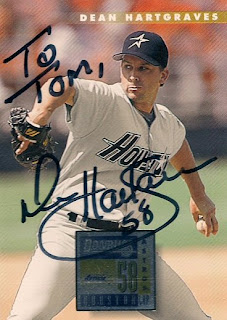 Drafted by the Astros in the 20th round in 1987, Dean Hartgraves would spend several years in the minors, mostly in Tucson, before making his MLB debut in '95. He continued to play for the Astros until 1996, however he was selected off waivers by Atlanta in June of that year. In '98 he saw some playing time with the Giants; at the end of the season he signed with the Padres but did not play any games with them. Instead, he would play in Japan in 1999 for the Chiba Lotte Marines.