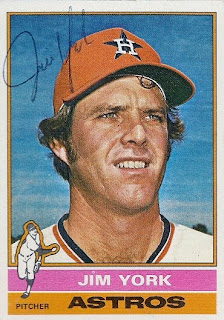 Jim York played with the Royals from 1970-71. Following that he spent four seasons in Houston, beforing playing one more season in the majors with the Yankees (1976). 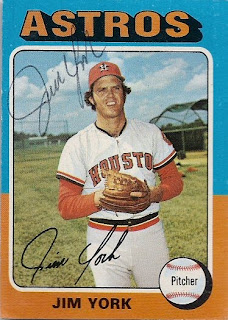 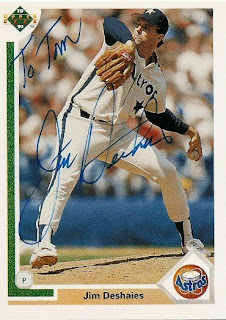 Initially drafted in 1978 by the Expos, Deshaies did not sign a contract until four years later with the Yankees. In 1985 New York traded him for Joe Niekro and some players to be named later. In '91 he was granted free agency; he continued to play ball with several other teams until 1995.

Deshaies remained in baseball after his retirement. He has been in broadcasting, both on television and in radio. 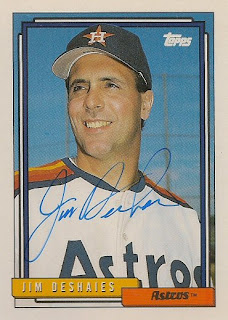 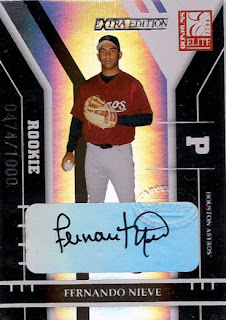 Fernando Nieve, aka "The Snowman", made his debut with the Astros on April 4, 2006. He had spent the previous five years in the minor league organizations. In March of '09 he was selected off waivers by the Mets.

I've never been a big fan of cards with signed stickers, and I'd honestly have to say this was one of the ugliest cards produced (no offense to the Snowman). What was Donruss thinking when they produced this series? 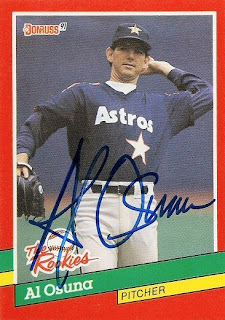 Al Osuna pitched for Houston for three years (1990-93); prior that that he spent a few years with their minor league teams.

He was drafted twice in 1985 (Orioles and then the Padres) but did not sign. In '87 he signed with Houston. He was traded in 1994 to the Dodgers for James Daspit.

Is it just me or is the '91 Donruss Rookie set the ugliest set ever released?
Posted by Tom at 8:26 AM No comments: 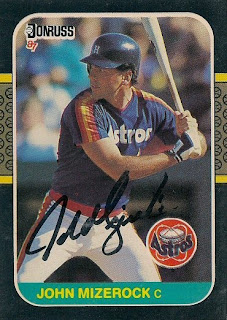 Drafted on June 5, 1979 by the Astros in the 1st round (8th pick) of the 1979 amateur draft, Mizerock would spend several seasons in the minors before making his major league debut in '83. He remained with Houston until released three years later.

Since retiring from playing he has managed in both levels. Last season he was with the Royals as a bullpen coach but it was announced two weeks ago that he would not be returning. Dayton Moore claims it was a "philosophical change". 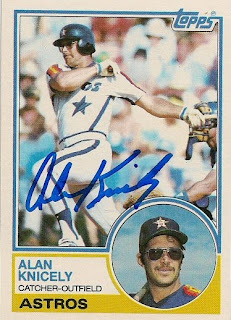 Alan Knicely was drafted by the Astros in the 3rd round of the 1974 amateur draft. After spending some time in the minors he finally made it up to the big leagues on August 12, 1979. He spent most of his time in the majors as a back up catcher.

On March 31, 1983 he was traded by the Astros to the Cincinnati Reds for Bill Dawley and Tony Walker. 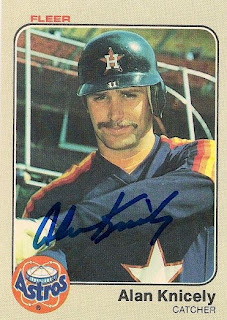 The first card shown reminded me of a song by some other folks from Houston...

"Now go out and get yourself some big black frames
With the glass so dark they won't even know your name
And the choice is up to you cause they come in two classes:
Rhinestone shades or cheap sunglasses!" 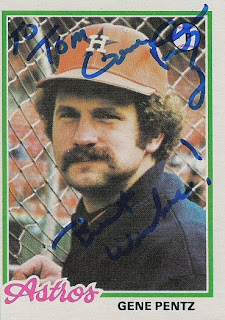 Here's a card I received this week; it's been a while since one has been sent back inscribed so I was quite pleased. I just wish I had a better card, rather than one that is so dark.

In December of 1975 Pentz was traded by the Detroit Tigers with Terry Humphrey, Mark Lemongello and Leon Roberts to the Astros for Jim Crawford, Milt May and Dave Roberts. He was released in September of 1978 and picked up by the Pirates. 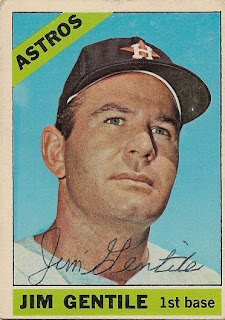 Diamond Jim Gentile first played in the majors with the Brooklyn Dodgers in 1957. He ended up in Houston in June of '65 after being traded by Kansas City. By July of the following year he was traded to the Indians.

Gentile hit 46 home runs in 1961 while with the Orioles, including a new AL season record of five grand slams. That year he hit grand slams in consecutive innings during one game. 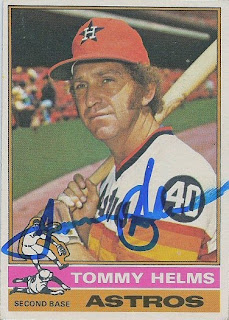 Helms made his major league debut September 23, 1964 with the Reds.

On November 29, 1971 he was traded by Cincinnati with Lee May and Jimmy Stewart to the Astros for Ed Armbrister, Jack Billingham, Cesar Geronimo, Denis Menke and Joe Morgan.

In December 1975 he was traded to the Pirates for Art Howe.

Following his playing career he managed the Reds (1988-89), twice filling in for Pete Rose, including when Rose was suspended for betting. 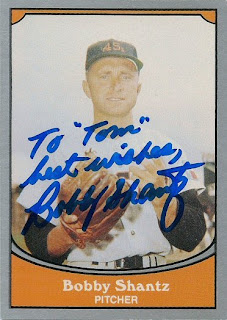 Bobby Shantz's first game was May 1, 1949 with the Philadelphia Athletics. During the 1961 expansion draft he was picked up by the Colt .45s from the Pirates. By the following May he was traded to St. Louis for Carl Warwick and John Anderson. 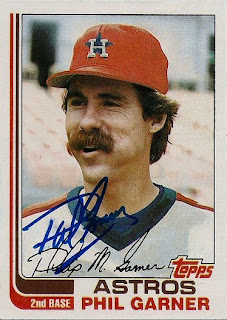 Traded to Houston by Pittsburgh on August 31, 1981 for Johnny Ray, Randy Niemann, and Kevin Houston, Phil Garner would remain an Astro until the summer of '87, at which time he was traded to the Dodgers. In 2004 Scrap Iron but back on an Astros uniform when he replaced Jimy Williams as manager.

The next season the Astros played in their first World Series but lost against the White Sox. By 2007 Garner was released and replaced by Cecil Cooper (himself recently released by Houston). As it turns out, Houston announced this week that Garner is one of ten that will be interviewed to replace Coop. 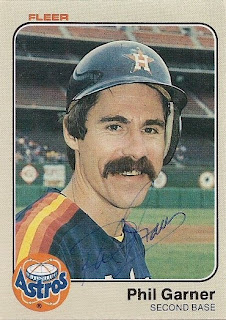 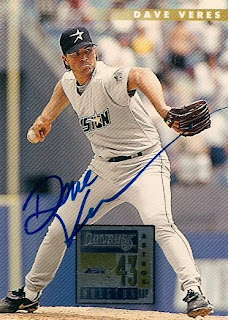 Dave Veres was with the Astros from 1994-95, having signed with them as a free agent; prior to that he spent some time with the minors affiliates of Oakland and L.A. He was traded along with Raul Chavez to the Expos for Sean Berry. 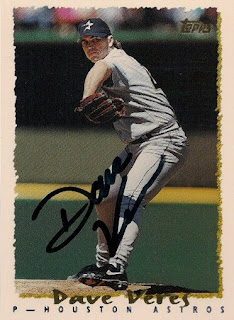 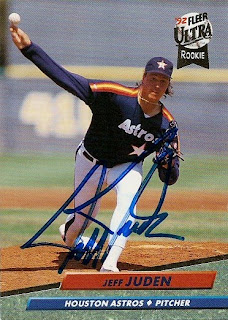 Jeff Juden was signed by the Astros in the 1st round (12th pick overall) of the free-agent draft in 1989. Most of his time with Houston was spent in the minors. He would play in only 4 games in '91 and just 2 in '93 before being traded along with Doug Jones to Philadelphia in exchange for Mitch Williams. 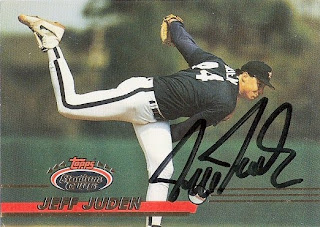 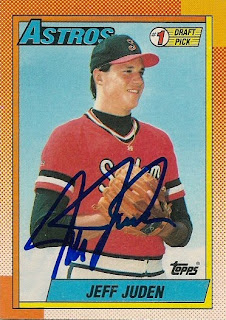 Jeff Calhoun was drafted by Houston in the 3rd round of the 1980 amateur draft. He spent several seasons in the minors before being called up during the '84 season. He would stay with the Astros until he was traded to the Phillies in 1987 for Ronn Reynolds. 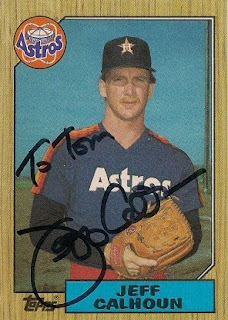 While he was was Houston he was a reliever with the 1986 National League West Champion; unfortunately, in Game 6 he managed to throw a few wild balls and the 'Stros lost 7-6. 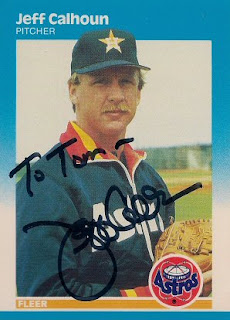 These days Calhoun has been involved in the ministry at Second Baptist in the Houston area; he also coaches there on the high shool baseball team. 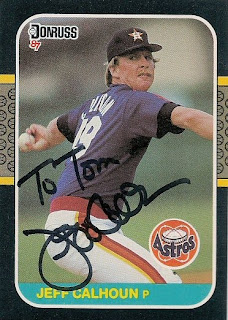 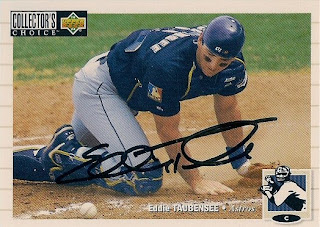 It looks like Eddie was playing in the dirt, found a ball and was thinking something along of the lines of "Hmmm...this looks familiar. I think I'm supposed to do something with this...but what?"
Posted by Tom at 7:38 AM No comments: 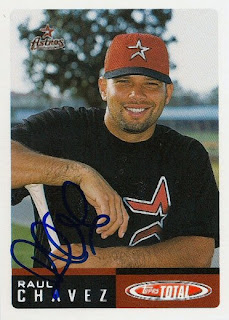 Currently playing for the Blue Jays, Raul Chavez was a member of the Astros in 2000 and again from 2002-2005. He was originally signed by Houston as an amateur free agent in 1990 and played in several of their minor league divisions through 1995 before making his major league debut with the Expos in '96.
Posted by Tom at 4:46 PM No comments: 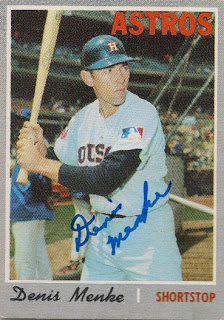 He was a hitting coach for the Astros for six seasons. 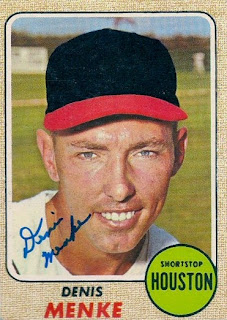