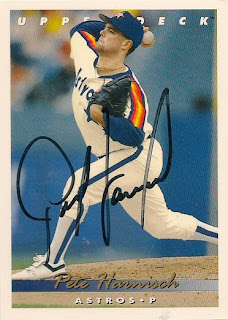 On January 10, 1991 he was traded with Steve Finley and Curt Schilling to the Astros for Glenn Davis. While in Houston he was on the '91 All-Star team. Also that year he struck out three batters on nine pitches against the Phillies, making him the 17th person in the NL and the 26th in Major League history to do so.

By November 1993 he was traded to the New York Mets for players to be named later. The New York Mets sent Todd Beckerman (minors) (December 6, 1994) and Juan Castillo (April 12, 1995) to the Houston Astros to complete the trade. 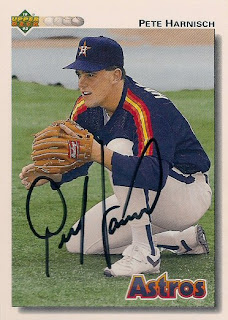 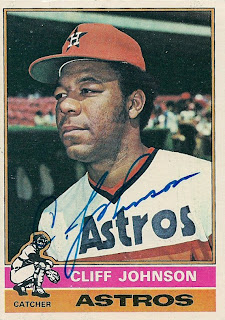 Cliff Johnson was drafted by the Astros in 1966 in the 5th round. After a few years in the minors he made his major league debut on September 13, 1972.

By 1977 he was traded to the Yankees for Mike Fischlin, Randy Niemann and a player to be named later; the Yankees sent Dave Bergman (November 23, 1977) to the Astros to complete the trade.

During his career he also played for the Indians, Cubs, A's, Blue Jays, and ended up back in Texas with the Rangers before retiring in 1985.

I had the privilege of being the guest on the morning show at KBHT 93.5 today. A good buddy of mine is the morning DJ, Jake "the Snake" Austin, and he asked me last week to be on today's Snake Farm (as his show is called; you Ray Wiley Hubbard fans will make the connection).

I had no idea this little ol' blog would be discussed; if I had I would have given a link to their web broadcast so all my loyal followers out there in baseball card blogland could listen in.
Posted by Tom at 11:52 AM 2 comments: 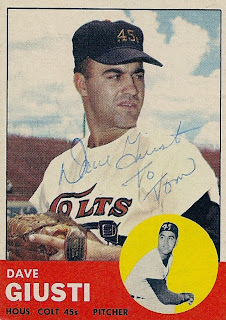 Dave Giusti was signed by the Colt .45s in 1961 as an amateur free agent. He would eventually be traded by the Astros on October 11, 1968 with Dave Adlesh to the St. Louis Cardinals for Tommy Smith (minors) and Johnny Edwards.

A starter with the Colts and Astros, he was known for his palm ball.

After retiring from baseball Dave was an executive with American Express.
Posted by Tom at 8:49 AM No comments: 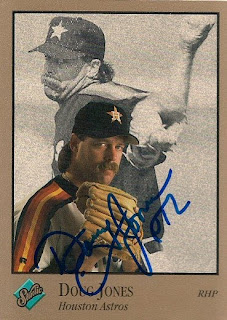 Doug Jones was drafted by Milwaukee in 1978. He eventually played six seasons with the Indians before signing with the Astros in 1992. He played the next season with the 'Stros before being traded along with Jeff Juden to the Phillies for Mitch Williams.

Jones, a relief pitcher, was known for his slow pitches that could always get the better of hitters that faced him. At the time of his retirement he was 12th in the majors with 303 saves. 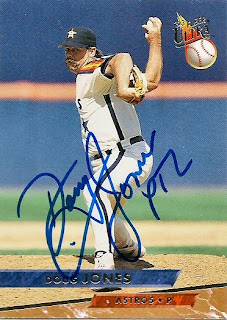 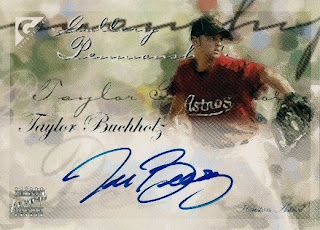 Drafted in 2000 by the Phillies for their minor league system, Buchholz was traded to Houston on November 3, 2003 along with Ezequiel Astacio and Brandon Duckworth for Billy Wagner. His first season with the Astros organization was spent in New Orleans, followed by two seasons in Round Rock with the Express. While in Round Rock he was called up during the 2006 season but was later sent back down to the Express that same year.

On December 12, 2006 he was traded along with Jason Hirsh and Willy Taveras to the Colorado Rockies for Miguel Asencio and Jason Jennings.
Posted by Tom at 9:20 AM No comments: