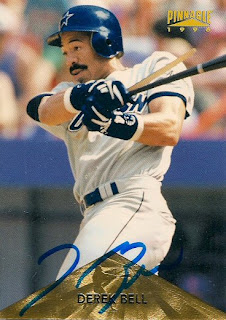 Drafted on June 2, 1987 by the Blue Jays in the 2nd round of the 1987 amateur draft, Bell spent several years in the minors before making his MLB debut in '91. During his time with the Jays he was voted the 1991 Baseball America Minor League Player of the Year and the 1991 International League Most Valuable Player. He was also a World Series champion in 1992.

On March 30, 1993 he was traded by the Blue Jays with Stoney Briggs (minors) to the San Diego Padres for Darrin Jackson.

Bell would be known as one of the Killer B's during his time with Houston. However, after an argument with Dierker (who had just returned to the team after nearly dying) and the opinion that he was becoming a liability, he was traded to the Mets on December 23, 1999 with Mike Hampton for Kyle Kessel (minors), Roger Cedeno and Octavio Dotel.

Just short of a year later he signed as a Free Agent with the Pittsburgh Pirates. 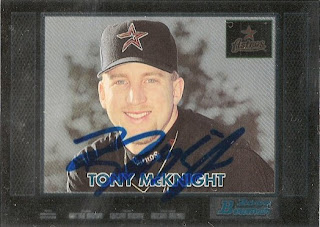 Tony McKnight was drafted by the Astros in the 1st round (22nd pick) of the 1995 amateur draft. He played five seasons in the minors before making his major league debut in 2000. He would play in just three games in 2001 with the Astros before being traded to the Pittsburgh Pirates for Mike Williams.
Posted by Tom at 5:21 PM No comments: 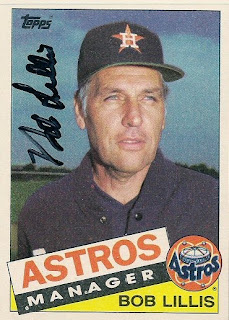 Bob Lillis was signed by the Brooklyn Dodgers as an amateur free agent in 1951 and played in thier minor league system for several years. His first major league game was in 1958

A scout and instructor in the Astros organization from 1968 to 1972, he joined their major league coaching staff in 1973 and replaced Bill Virdon as manager on August 10, 1982 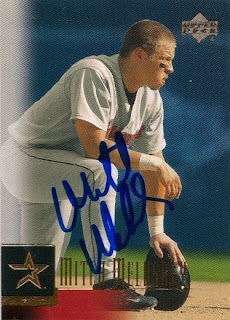 Just like Chris Holt, Houston and Detroit were the only major league teams that Mitch Meluskey played for. Not only that, they were both born on September 18 (although two years apart). He finished fifth in balloting for the National League Rookie of the Year award in 2000 after hitting .300 with 14 home runs and 69 RBIs. 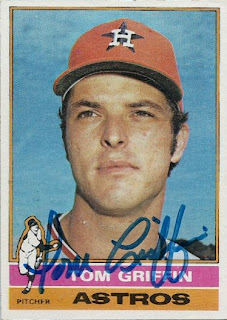 After being drafted by the Astros in the 1st round (4th pick) of the 1966 amateur draft, Griffin spent a few years in the minors before making his major league debut on April 10, 1969. He continued to play for the Astros until 1976 and was at that time picked up by the Padres. 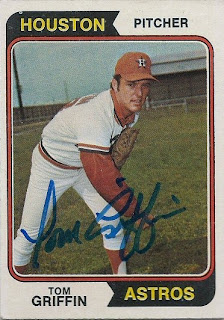 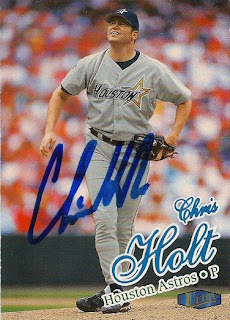 Chris Holt was drafted in the 3rd round of the 1992 amateur draft. On December 11, 2000 he was traded by the Astros with Roger Cedeno and Mitch Meluskey to the Detroit Tigers for Brad Ausmus, Doug Brocail and Nelson Cruz.

Holt spent the majority of his MLB career with Houston, except for the 30 games with Detroit and 12 games with AAA Colorado Springs in 2002 before going to Japan.

He was a member of the Astros' National League Central Division champions in 1997 and 1999. 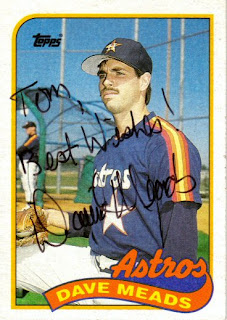 It's time to start posting some more cards! I've gotten lazy and have neglected my blog. Actually, the last three or four posts were scheduled to be published while I attended a sex offender registration conference in Galveston, Texas. The week after that I was actually on vacation, though I spent most of the time going out of town; one trip to my rheumatologist, one trip to take my kid to the doctor, a visit for an eye exam for myself (getting my first pair of bifocals; these things are expensive and will eat up some of my baseball card funds!). Following all of that I had to do the Thanksgiving thing. Then, when I got back to the office there was a ton of work to catch up on plus I've been in court nearly every day.

So, now it's time to catch up on some cards! I'll start off with what came in the mail today: Dave Meads

Meads was drafted by the Astros in the 6th round of the '84 amateur draft on January 17, 1984. He spent several years in the minors until 1987. That year he played in 45 games. The next year he only played in 22 games with the Astros. He also played over 20 games in the minors during those years (Tucson). He retired in '89, still with Tucson. 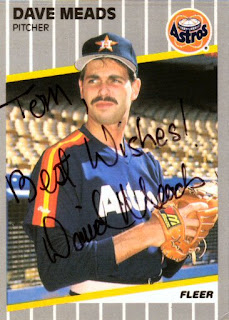