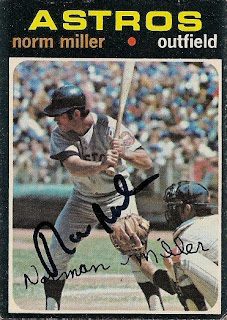 Signed by the Los Angeles Angels as an amateur free agent, Norm Miller would began his career in Houston as a result of the 1964 first-year draft. He was drafted by the Colt .45s in November and put on the Astros jersey the following season.

His first game was on September 11, 1965 in Los Angeles. In he top of the 8th inning he pinch hit for Danny Coombs and hit a single that advanced Ron Brand to second. Unfortunately the Dodgers beat the Astros 8-3 that game.

In April of 1973 Miller was traded to the Braves for Cecil Upshaw. He would play in Atlanta again in '74; the next year he was picked up by the Dodgers but then released.

According to his website for his book, 'To all my fans from Norm Who?', he has worked 30-plus years in marketing and advertising and "for the past 13 years (has) been associated with a publicly–traded bank headquartered in Houston". 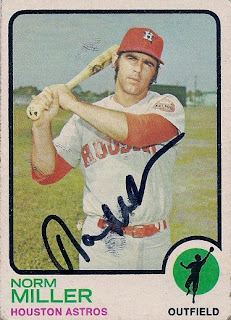