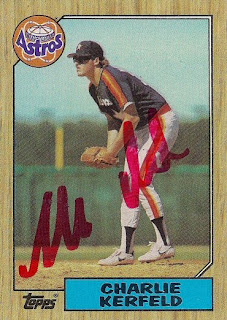 Kerfeld began his career in Houston in 1985 where he would play until 1990. He also played for the Cardinals in '90 and later retired that year. He was known for wearing a Coneheads mask along with Larry Andersen and Dave Smith during games while hanging out in the dugout.

I sent these cards off on 8/11/09 and received them back on 8/22/09. I included an extra of each card, which were also signed and returned. Evidently Charlie didn't give the cards time to dry before putting them into the return envelope (the signatures are a little smudged, plus some traces of red ink was transferred to the backs of the other cards). Still, if anyone is interested in trading for my doubles let me know. If you're looking for perfection don't bother asking! 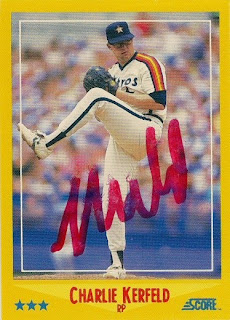