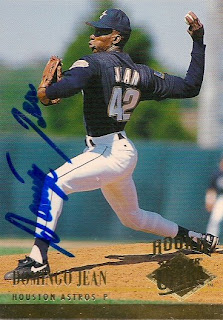 Jean continued to play for nearly ten years in the minors after his brief stint with the Houston organization. He retired in 2003 after a shoulder injury. Currently he is teaching others at his training academy in Florida, the Domingo Jean Baseball Academy. You can learn more by visiting his website.
Posted by Tom at 9:39 AM