I sent a 1962 Topps card to Bob from when he played on the Colt .45s on 5/5/09 and it came back on 5/14/09. I had six or seven extra cards so I sent him my best one; unfortunately it came back in the mail a little bent up. I've been sending off cards lately just using a few index cards on each side of the card(s) I want signed and so far I've had no problems. Looks like I'll have to start sending cards in hard plastic protectors again. The next time I send Mr. Aspromonte a card I won't take a chance again...not with such an old card. 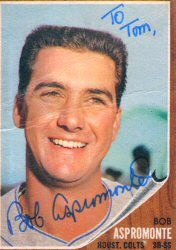 Bob sent a signed paper showing him playing for both the .45s and the Dodgers. It's always a nice surprise to get back a little something extra.