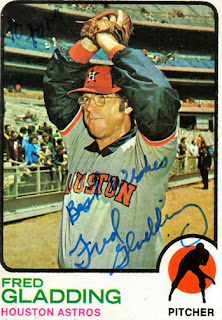 For some strange reason I really like this card. I don't usually go for posed shots of players, preferring live action shots by far, but there's something about this picture that says something to me.

I like the background more than anything, I guess. The different colored seating sections/levels always looked pretty cool to me. On closer inspection it appears that a guy on the the left is trying to touch Fred under his armpit? Or is that just a group of folks hoping for a signature? And what about the cop on the right? Do you ever think they appreciate the fact that they get to stand around on the field and mingle with players while getting paid to watch games for free? Man, they should let probation officers get in on that gig! 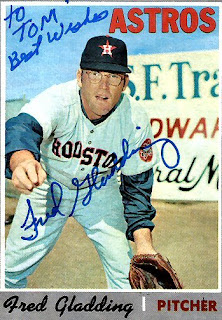 I love this 1970 set. I've got about half of the '70 set completed so far....not all in mint condition but close enough for me. I was born in '70 and I'm not in mint condition anymore, either. Hell, I'd settle for a grading of VG+ these days!