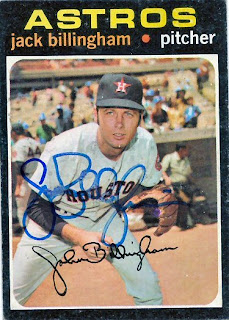 I sent off a 1971 Topps #162 to Mr. Billingham on 6/4/09 and received it back in today's mail. I wish I had a better looking card to send to this former Astro, but it seems to be hard to find these older '71s in good condition. In fact, most of mine seem to show a little wear.

Billingham was traded to the Reds, along with Joe Morgan, Dennis Menke and Ed Armbrister and eventually appeared in two back-to-back World Series with them.

I was doing a little research on Cactus Jack and learned that he was a cousin to baseball legend Christy Mathewson. That's pretty impressive!
Posted by Tom at 12:39 PM