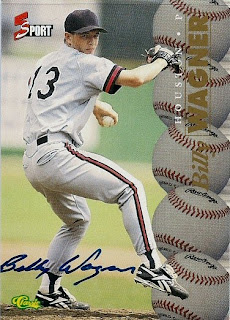 Billy 'The Kid' Wagner began playing in the minors after signing a contract with Houston in 1993. He played one game in the majors in '95, facing only one batter from the Mets. Two years later he played his first full season in the majors. He would play for the 'Stros until 2003 when he was traded to the Phillies for Ezequiel Astacio, Taylor Buchholz and Brandon Duckworth.