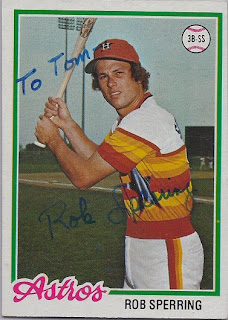 Rob Sperring played for the Cubs 1974-76; prior to that he played some minor league ball for them after being drafted in 1971 in the 5th round. The following year he played in Houston (1977). Originally, he was traded to the Giants, but the next month the Giants traded him to the Astros, along with Willie Crawford, for Rob Andrews. He would remain with the Houston minor league division for the next two years (1978-79).