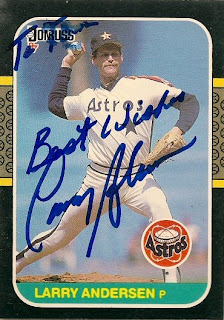 Larry Andersen's first game was on September 5, 1975 with the Cleveland Indians. He would play with the Mariners and Phillies before coming to Houston in 1986. His last season here was in 1990. He would be traded for a minor league player that would become a legend for the Houston franchise: Jeff Bagwell.

Anderson was known for wearing a Conehead mask, along with Dave Smith and Charlie Kerfeld.

Andersen explains how wearing a conehead in the bullpen came to be in this interview with Ray Kerby: "The conehead idea actually came from Sparky Lyle when he was with the Rangers in '77 or '79, can't remember which year. He had one he got from Disneyland and I went to his house after a game one year with Ron Pruitt who was a teammate of mine with Cleveland. The next day Pruitt wore it during the anthem and got quite a reprimand from the ballclub. However it was hilarious and I decided I had to have one. So my next trip to the "small world" place I got one for myself. That's how it all started and I carried it with me from that day on, to all the clubs I played with". 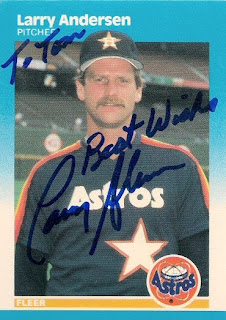