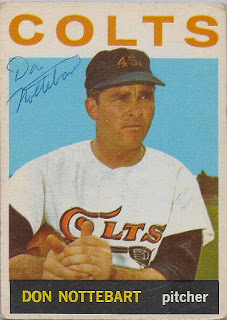 Don Nottebart's first MLB game was with the Milwaukee Braves on July 1, 1960. In 1963 he was traded to the Colt .45s (along with Jim Bolger and Connie Grob in exchange for Norm Larker) and would leave Houston two years later as an Astro.

Don passed away October 4, 2007 in Cypress (near Houston), which is where he and his wife usually spent thier winters.
Posted by Tom at 8:52 AM