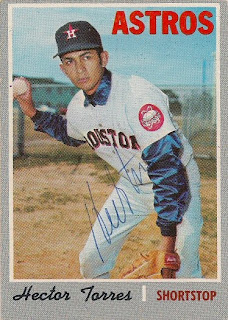 I'll do two posts today since it is Hector's 63rd birthday.

Hector was born 9/16/45 in Monterrey, Mexico. He began his major league career with the Astros on April 10, 1968 and would remain in Houston until 1970; in 1973 he came back. Prior to his second stint as an Astro he saw some playing time with the Cubs and the Expos. Following that he would play for the Padres before ending his playing career with the Blue Jays in '77.

Hector is currently the pitching coach for the Bowling Green Hot Rods (a farm team of the Rays).

I find this 1970 Topps card interesting for several reasons but one stands out: there's hardly any grass on the field. What's up with that?